Managing your Music on your ReadyNAS

A primary use of home NAS devices is the central storage of, and access to, a media library. For many people a large portion of that library will be music, music that is also often being accessed by multiple applications: SqueezeboxServer, DLNA servers, iTunes etc. 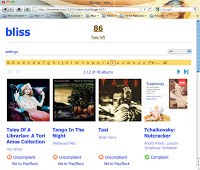 It would of course be of great advantage if that music library could be managed directly on the NAS in a manner that all these other applications can access the same consistent metadata and cover art and I recently came across the application bliss, the aim of which is exactly this - a single web based tool for organising a music library. While it appears to be in the relatively early stages of development, with an initial early focus on Album Art management, it works very, very well and I’m keen to see how it develops.

I won’t cover the functionality of bliss here, there are full detailed instructions on the bliss website, but here are some instructions specifically for installing bliss on a ReadyNAS device.

Note: as bliss is a java based application it can only be supported on x86 based NAS such as the Pro and Ultra series. Sparc based devices like the Duo & NV+ are not - and will never be - supported

(Update: 11 June, 2011) I have now written a ReadyNAS addon to simplify installation - details can be found at https://www.sphardy.com/web/bliss

One of the most common tasks ReadyNAS users wish to use their devices for is to host a small personal web site. Here’s how…